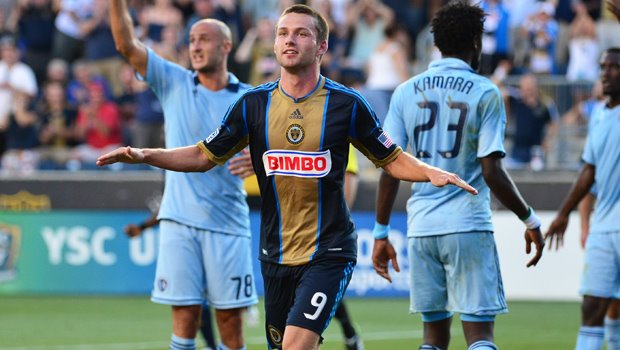 Chester, PA – Jack McInerney made history scoring the fastest goal for the Philadelphia Union 58 seconds into the match against Sporting KC. McInerney and the Union made sure to show interim Head Coach Hackworth that the spark was still there from last week. Behind the young guns the team thrashed KC 4-0, giving Hackworth his first win and showing him that this team can score goals.   Jack McInerney who has been fighting for playing time all season jumped on a loose ball in the box and drilled it into the back of net, putting the Union up 1-0 just 58 seconds in the match. This was a perfect example of never giving up a play and following up on a defected shoot.

Sporting KC coming off a long road trip in Seattle, showed some signs fatigue KC made up for their lack of speed with a physical presence. The two teams fought it out the pitch combining for 19 total fouls, 10 going to KC in first half alone. During a KC corner kick in the 17th minute the team saw some light when Cesar found himself unmarked  in the box. He was outside the 6 yard when a defected ball come to him. He swing  and missed the ball in what could have been a shot on goal. Seconds later Caesar recovered the ball to just swing and miss again. About ten minutes later KC’s Chance Myers played a soft cross into Teal Bunbury that he headed just over the reach of Union keeper Zac MacMath and cleared the cross bar by a few inches.

In the 41st minute Jack (McInerney) was back at it, scoring his 2nd goal of the match. It came off a defected ball in the front the box, sending PPL Park into a frenzy and making Hackworth’s decision to start him again look all the smarter. This put Union up 2-0 and was the score at the half. Speaking with McInerney after the match he said, he isn’t the biggest guy in the pitch so he not going to win a lot headers in the box so he knows to keep a close look out for defections and be a “Johnny on the spot” scorer when needed. If this keeps up maybe in Philadelphia he can coin the term “Jack on the spot” or “Jack in the box.”

The second half was still a physical battle with KC committing 10 more fouls to the Union’s seven. The match seemed pretty even which didn’t bother the Union since they held a 2 -0 lead. Hackworth did insert one of his spark-plug forwards rookie Antonie Hoppenot in the 59th minute for Freddy Adu. Hoppenot did not wait long to make an impact as he clipped a ball just over the cross bar in the 69th minute.   KC started to get back in the match with a lot pressure up top and found themselves with a free kick just out the 18 yard box in the 75th minute.  Union keeper Zac MacMath stepped up with a huge diving save off the Zusi free kick from 22 yards out. This kept the Union up 2-0.

Hoppenot found himself as the lone striker to receive most the through balls and forward passes, his speed and skill were a factor as he harassed the KC defense. In the 80th minute he found himself one on one in the box with KC defender Aurelien Collin. Hoppenot made a crafty move on Collin and beat him to goal. But Collin had other plans and fouled him en route to the goal. Referee Terry Vaughn and all 18,207 fans at PPL Park knew it was a penalty and penalty kick was awarded. Lionard Pajoy stepped up and put the ball on the back of the net with a low rocket to the right side of the goal. This put the Union up 3 – 0 and had the fans believing the losing streak was over.

The night was capped when Hoppenot was finally able to get his first league goal by chipping ball over Nielsen in the 87th minute and put the Union up 4-0. This goal confirmed Hackworth’s first win as interim manager and gave the Union fans something to celebrate.

The Philadelphia Union are back in action this Tuesday June  26, 2012 as they host Harrisburg City Islanders in the quarterfinals of the US Open Cup. If the Union  win this match and KC beats the Dayton Dutch Lions then KC will travel back in PPL Park for the semi-finals on July 10 or 11th.

The Philadelphia Union are back in action this Tuesday June  26, 2012 as they host Harrisburg City Islanders in the quarterfinals of the US Open Cup. If the Union  win this match and KC beats the Dayton Dutch Lions then KC will travel back in PPL Park for the semi-finals on July 10 – 11th. 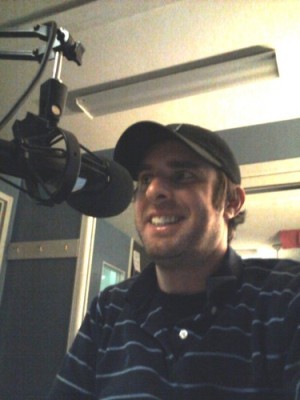